Showing posts from September, 2015
Show all

Taking the Precepts in Gibberish 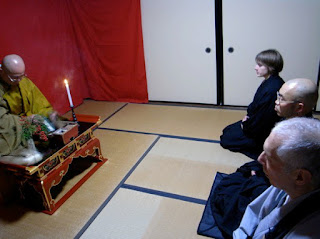 This week I was chatting with a new Buddhist friend, and I kept making jokes about how I was breaking precepts-- by gossiping, or creating divisions in the sangha, which aren't technically precept violations in the Soto Zen tradition (but are in others!). Over the course of the conversation, I kept adding to the list of my imagined precept violations.

"Sorry," I said finally. "I actually don't know what the precepts are."

"That's because you took the precepts in gibberish," he said.

I've received the precepts four times in gibberish: twice in Japanese and twice in Tibetan (from Tibetan Rinpoches in America and India, when I was in college). I wonder how much difference language makes. Because the precepts are something we work with and evolve, break and renew, ingest and digest on a very personal, individual level, language matters. I think saying the precepts in our own language (or at the very, very least, understanding what we are sayi…
4 comments
Read more
More posts